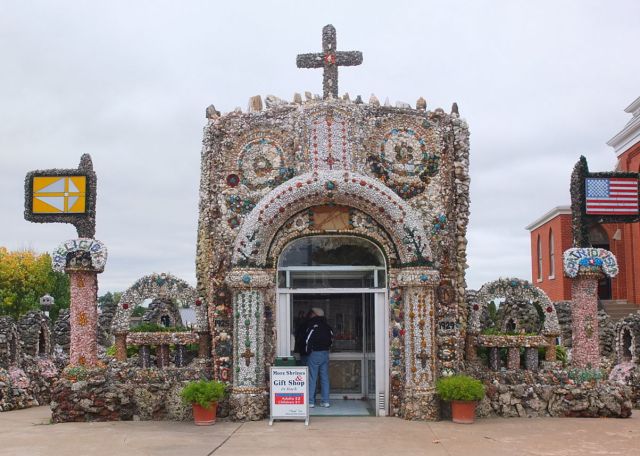 Many art environments are built without a precedent. There is typically no direct inspiration from one place to another, or if there was an antecedent it is lost to history. There is one environment though that appears to not only been inspired by another, but also helped ignite the art environment craze in the Midwest – The Dickeyville Grotto. The last statement is true only if two or three art environments constitute a “craze”.

The Dickeyville Grotto sits on the grounds of the Holy Ghost Church in Dickeyville,

WI. Father Mathias Wernerus, a German immigrant and several helpers built the site between 1918 and 1930. While maybe not the craziest or weirdest environments in the land it is one of the oldest, most influential and displays some beautiful mosaic craftsmanship.

Father Wernerus was influenced by the German grotto building tradition of his homeland. Additionally, there is a high possibility (though not 100% confirmed) that he was inspired by the Grotto of the Redemption, an art environment just shy of 250 miles to the west in West Bend, IA.

The Dickeyville Grotto and shrines are made with concrete, crushed

glass, shattered china plates, sea shells and assorted other knick-knaks. Besides the main grotto at the front entrance (pictured up top, which sort of looks like a giant bird face about to eat someone) there are several other large shrines and embellished garden paths. Like many great art environments, Father Wernerus built the grotto with minimal if any planning or blueprints.

There are two central themes throughout the site, god and country. The main grotto is flanked with an American flag on one side and a catholic flag on the other. Other shrines around the grotto are monuments to Jesus, his mommy Mary as well as Christopher Columbus, George Washington and Abraham Lincoln.

The grotto quickly became a very  popular tourist and pilgrimage site. Although, maybe not as popular as it was in the 1930s (one story has it that it once received 10,000 visitors on a single Sunday) it still receives tens of thousands of visitors a year (not too shabby for a folk art environment). The Dickeyville Grotto is part of the Wandering Wisconsin map and directly inspired at least three additional sites on the trail; Paul and Matilda Wegner’s Grotto in Sparta, WI, the Rudolph Grotto in Rudolph, WI and Nick Engelbert’s Grandview in Hollandale, WI.

There is also some evidence that the Dickeyville Grotto was an inspiration for Simon Rodia, the man who built the amazing Watts Towers in Los Angeles, CA. Rodia claimed in an interview that he was a contracted laborer at Dickeyville. In one story related to interviewers by Rodia’s friends, after finishing some work on the grotto he asked Father Wernerus for his paycheck and instead of cash he was given bupkis and was told he was doing “god’s work.” It is unclear whether this is true or not, and some details concerning Rodia’s life before Los Angeles just don’t add up, but it makes for a great story (although it makes Father Wernerus sound stingy).

The grotto is one of the more well known, well kept and popular environments in Wisconsin. The mosaic work is really something else and its dual themes of patriotism and religion represent an old fashioned sincerity that you don’t see much in tourist attractions these days (for better or worse). Whether you see it as a pilgrimage site, an old-school tourist attraction or great example of a folk art environment it makes for a fascinating excursion.

The Dickeyville Grotto is located at 305 W Main St, Dickeyville, WI 53808 in the southwest corner of the state. Like most of the sites on the Wandering Wisconsin trail, the Dickeyville Grotto is open 365 days a year during daylight hours. They ask for a very reasonable $2 donation, so don’t be a chisler (like Father Wernerus) and drop a few singles to help with upkeep. Guided tours are available everyday in the summer and on weekends in the fall. There is a gift shop selling mostly Catholicism related goods and books. The store is open daily April to the end of October, and on the weekends in November and early December. There is plenty of street parking out front and when it is open, there is a bathroom in the Holy Ghost Church next door. Check out their website for the most up to date tour and bookshop hours.

The Grotto is located on the great river road near the borders of Illinois and Iowa. For a little road trip it is about three and a half hour drive from Chicago, IL, two and half hours from Milwaukee, WI.

This whole section of the state is pretty rural and there are some really charming small towns, including Mineral Point about 30 minutes away. Go another 13 miles further east and you will run into the really quirky and great art environment Nick Englebert’s Grandview in Hollandale, WI. 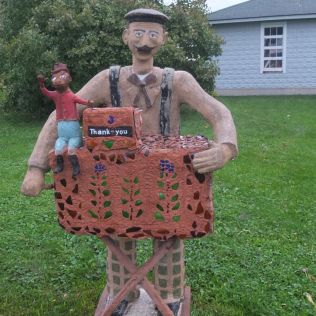 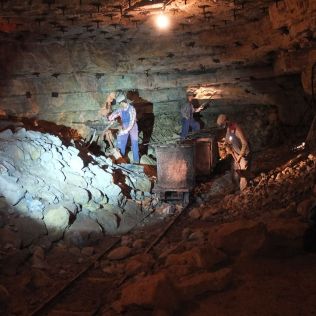 In the immediate area is a really fun little museum, the combined Mining Museum/ Rollo Jamison Museum which is only 15 minutes northeast in Platteville, WI. The mining museum takes you underground into an old lead mine where, and you probably saw this coming, you learn about Wisconsin’s mining history. The other part of the museum highlights objects amassed by Rollo Jamison. Jamison was an avid collector during his lifetime who built his own museum in the 1950’s to showcase his collection of everyday early and mid 1900s objects and assorted oddities. After Jamison passed away in the 1980s, his collection was saved and moved by the city of Platteville to the new museum.

Stone, L., & Zanzi, J. (1993). Sacred Spaces and Other Places: A Guide to Grottos and Sculptural Environments in the Upper Midwest. Chicago: The School of the Art Institute of Chicago Press.

2 thoughts on “Wisconsin Part 2: The Holy Ghost comes to Dickeyville”