We are back to the land of badgers and dairy cows to tackle another spot on the Wandering Wisconsin art environment trail. This week I present to you – The Paul and Matilda Wegner Grotto.

After visiting the Dickeyville Grotto in 1929, and being impressed and inspired by what they saw, Paul and Matilda Wegner, said, “I can do that.” They then went back to their farm in Cataract, WI and started building.  At this stage in the game, they were retired and while neither had been artists by trade, they really took to transforming their land into a unique personal monument.

The Wegners lived long enough to see their humble yard turned into a popular tourist attraction. Paul passed away in 1937 and Matilda five years later in 1942. When they were alive, they would not let travelers take photos of their mosaic statues. Instead, they made them buy a real-photo postcard. However, since they passed away over 70 years ago they are no longer able to stop you from clicking away (even if they came back as scary ghosts they will probably not understand digital technology and presumably will not haunt you…in case that is a concern of yours).

They built several nice pieces, including what at the time was dubbed the “glass church.” A mini chapel encrusted with broken glass mosaics. When Paul passed away, they held his service here.

Most of the statues around the yard are concrete with glass and pottery mosaic shards. Besides the glass church, the Wegner’s built a fence, an American Flag, a

reproduction of their 50th wedding anniversary cake, a replica of a popular ocean liner named the Bremen and several other pieces.

The Wegner Grotto is perhaps the smallest site on the Wandering Wisconsin trail, but that does not mean it should be skipped, it has some really nice mosaic work and is nicely isolated in the middle of nowhere. And like the Dickeyville Grotto that inspired it, it hearkens back to a time when God (in this case Christianity) and adopted country (the Wegners, like Father Mathius Wernerus who built the Dickeyville Grotto, were German immigrants) were common and important components of everyday life. Many of these older sites are uniquely stuck in the past and make for a fun time traveling trip to a different era.

The Wegner Grotto is located in Cataract, WI, off Highway 71, about half a mile west of Highway 27. There is no real address to plug into your GPS; however, you can plug in the coordinates 44.061224, -90.867672. It is officially open during daylight hours between Memorial Day and Labor Day, but it can be accessed year round. There are some informative plaques set up around the environment. The site is unmanned, but tours can be set up through the Monroe County Local History Room & Museum, who are the grotto’s caretakers. You can visit the history museum a few minutes away for more information. The history room is located at 200 West Main St. Sparta, WI. Also, contact the museum if you wish to have your wedding at the Wegner Grotto.

The Grotto is pretty much in the middle of nowhere. It is about two hours northwest of Madison, WI and two and a half hours southeast of Minneapolis.

There are a few really interesting travel opportunities nearby. 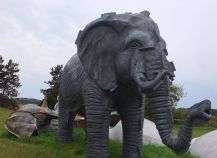 Only about a fifteen-mile drive away in Sparta WI, there is the Fast Corporation Fiberglass Mold Graveyard. Fast is a company that makes large fiberglass statues that are used all across the country, often for advertising. In the large yard around their factory, they scatter their molds and other assorted half-finished projects, so they can be used again later on. There is row after row of giant cool animal and character molds. People are free to wander around the yard. It is a ton of fun to peruse (and it’s free).  It is located at 14177 Co Hwy Q, Sparta, WI 54656.

If you like space memorabilia and bike riding you could not be in better luck. Because upstairs from the Monroe County Local History Room, and I did not make this up, is the Deke Slayton Space & Bicycle Museum. Two totally random museums in one. Old bikes on the right hand wall, space stuff on the left. Deke Slayton was a member of the Mercury 7, the first American astronauts to fly into space. The museum is located at 200 West Main St. Sparta, WI.

I can’t vouch for the next stop on the itinerary because they were closed the day I was in the area, but about 20 minutes north of the Wegner Grotto is the Jackson County Historical Society Museum in Black River Falls, WI. Now most county history museums are sort of big snooze fests, but this one looks really interesting. They have a permanent exhibit that I think could be very cool to fans of the old, weird America. I am really bummed I missed out. In 1973, Michael Lesy wrote a cult favorite book named Wisconsin Death Trip. The book has excerpts from violent and strange news stories found in late 1800s rural Wisconsin newspapers. Stories include suicides, disease, murder, arson and as crazy as it is to see in a local newspaper – ghost sightings. These stories are co-mingled with photos by Charles Van Schaick, a rural Wisconsin photographer of that time. The odd assortment of news clippings mixed with the old photos makes for a haunting, strange and slightly surreal book. Well, the Jackson County Museum has local boy Van Schaick’s photos on exhibit. The museum is located at 321 Main St, Black River Falls, WI. Check their website or Facebook page for hours.