Ted Ludwiczak, the artist behind a  fun art environment, Easter Island on the Hudson, passed away on May 25, 2016, he was reportedly 90 years old. I had written about Ludwiczak briefly when talking about the Hudson River Valley Art Environment Trail, here. Of all the places on the trail, his was the only one that was actually located directly on the Hudson River. 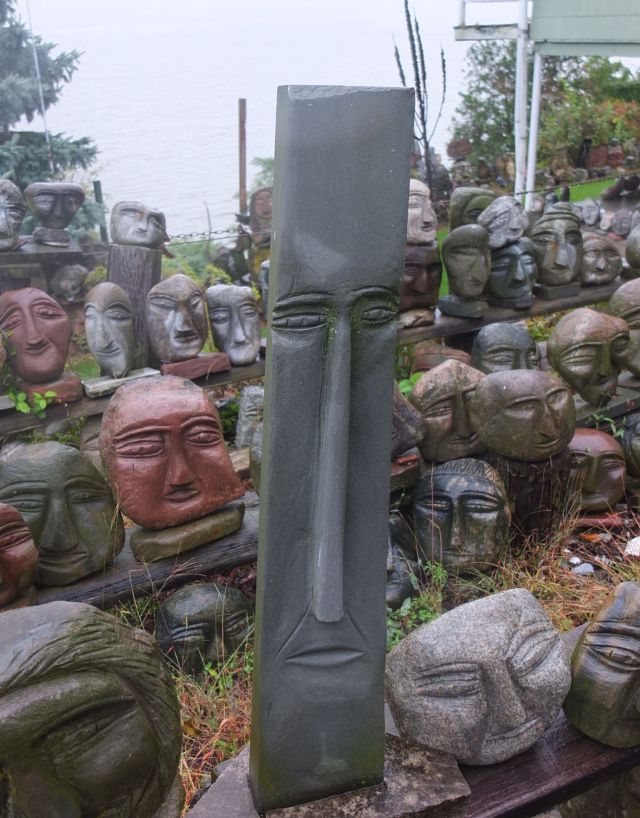 Ludwiczak, immigrated to America from Poland when he was 29 years old in 1956. He had a optical lense grinding business for the next 30 years, retiring in 1986. Two years later, in 1988, inspiration struck him and he started carving faces into the rocks found on the beach along the Hudson.

Every face is different. Most are happy. He started chipping away using the blade from a lawn mower, but ultimately transitioned into using power tools. As it stands currently the outside of his house is littered with hundreds of these carved faces. They are not nearly as big as their namesake Easter Island Moai, but there are just tons of them all over the place in his front, back and side yard. Ludwiczak’s property butts up to the Hudson and there are more rock heads along the shore for boaters to enjoy.

Last fall I had the chance to visit his house. It was raining outside when I showed up and knocked on the door. Ludwiczak popped out and happily granted me permission to walk around his yard. Typically, in these situations, I like to talk to the artist a bit, but it was nasty out and I didn’t feel like hassling him. . It was a true pleasure walking around the yard; the sculpted smiles were infectious. You couldn’t help but smile back.

Most of the environments I have visited have been around many decades and the builder has long passed. However, I have been lucky to meet several artists still building up their yard. With that being said, a large portion of environment architects are old timers. Many times, like this situation here, the artist started building after retiring from their day job. I have been now to three environments where the artist has gone off to folk art paradise after I have visited (and just to clarify, I am not murdering artists). This includes, Hamtramck Disneyland and Glenn Stark’s environment, both of which I have yapped about in this blog. Hamtramck Disneyland has recently been saved by an art collective (hell yeah, that is so great!), Stark’s statues were taken off his property and the city moved them to a local park. 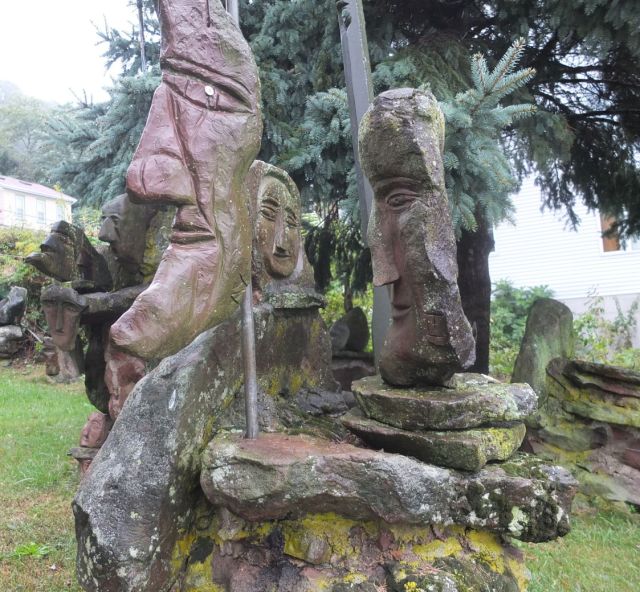 At this point, I have no idea what the future holds for this place. I hope that either Ludwiczak’s family or some art organization, like Kohler, steps in to preserve the place. But I really don’t see that happening. This was a pretty obscure site, and it never received the notoriety and appreciation that some other sites have. It would be too easy to auction off the faces and sell the property. So get your asses up there before it is too late. I will keep you posted.

So, here’s to Ted Ludwiczak, a self-trained artist, who in his later years for reasons completely his own, decided to gussy up the already beautiful Hudson river, by adding a few hundred more pretty faces and helping to make this world a slightly better place. Cheers!

This is probably time sensitive. I am writing this in late May 2016, and who knows how much longer this info will hold true. Easter Island on the Hudson is located at 14 Riverside Ave, Haverstraw, NY, about a little over an hour drive north of NYC. It is on a residential street right along the river. Most of the statues can be seen from the street. I am not sure if they want people tramping through his back yard or not, but there is plenty to see from the front. If you have a yacht, you can drop anchor right outside his back yard.

Get going while the gettin’s good.

South of Haverstraw is New York City, a large wide-awake apple. There is a lot to do in New York City, it is an amazing place filled with some of the world’s most renown restaurants, night life, cultural institutions and museums. But honestly, I am more interested in what you find in the boonies, so skip it and head north instead.  There are some great museums and offbeat attractions in the Hudson River Valley. 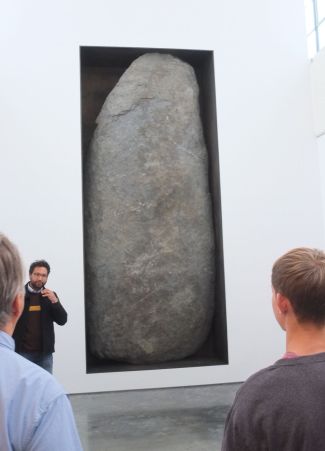 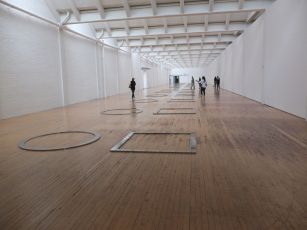 About an hour north I recommend heading to the DIA: Beacon. The DIA is high-concept meta-art (art about  art) at its most artsty artyness. If there was an 80s movie set in the DIA: Beacon everyone would be clothed in black and wearing berets. Housed in an old warehouse everything, all the art, is huge. See the photos above for an idea. If you are a fan of the land art movement you will poop yourself in astonishment. It has pieces constructed by land art luminaries Robert Smithson and Michael Heizer (see the boulder in the wall above). Before heading there you have to read the Yelp reviews, they are hilarious, either people adore it and find it to be brilliant, or think it is ridiculously pretentious, or believe it  to be the dumbest museum ever. Personally, I absolutely loved this place, because they are all correct, it is a beautiful mix of brilliant, pretentious, and dumb.

There are two other nearby attractions I didn’t make it to, because as I mentioned previously, it was pouring outside. They were both very high on my “to see” list, and it means I have to head back out this way. I cannot personally vouch for ’em, but they look pretty awesome.

First, there is Bannerman Castle, a deteriorating military surplus warehouse/ castle. It sits on an island in the middle of the Hudson and you can book a tour of the island.  I guess you can’t actually enter the castle as it is in pretty bad shape, but still looks like a pretty great opportunity.

And, if you haven’t already, please check out my dumb list about the Hudson River Valley Art Environment Trail, because there are some terrific ones nearby.