I am going to take a little break from Wisconsin this week because I just found out the fate of a small, relatively unknown environment in Kansas that wifey and I visited in May 2014.

Some art environments are better known than others. There are easily less than 50 places that I would call “major” environments. Sites like the Watts Tower, the Heidelberg Project, Salvation Mountain, the Grotto of the Redemption, the Forevertron, the Dickeyville Grotto, S.P. Dinsmoor’s Garden of Eden, the Orange Show, the Coral Castle and Howard Finster’s Paradise Gardens, are mentioned regularly in books, magazines, indie documentaries, news articles and on the web. If you haven’t heard of any of the places I just mentioned that just goes further to show how obscure a topic this is, as those are seriously probably ten of the most well known established American sites. Most of these environments have endured for decades as tourist attractions and are supported with money and some sort of management infrastructure. Plus, they all have really intriguing cool names either given to them by the creator, or visitors. You have strange mountains, towers, castles and esoteric gardens; places where people traditionally go to defeat an evil wizard or fight off the impending goblin horde (thanks Obama!), not look at art. Places with names that make you want to visit them.

For every well known art environment, there are tens, if not hundreds of  obscure ones. These are the sites typically located on personal property that may be too new or geographically isolated, thus remaining obscure. They may be ignored or misunderstood by the local community, or may be not aesthetically pleasing enough to receive as much buzz from writers. It is hard to find the history, or latest information, on them. Often, there is not a website and if there is any visitor info, it is certainly not current. I once tried calling the phone number of an obscure Wisconsin art environment that I found in an old travel book. I wanted to see if I could come take photos of the place. A woman answered the phone and not knowing exactly how to phrase my question, I asked her if she had a museum in her front yard. Without hesitation, she said no, there was no museum in her front yard.  She did not take the time to double check. She probably thought it was a set up for a prank call. Is your refrigerator running (better go catch it)? Do you have Prince Albert in Can (better let him out)?  Do you have a museum in your front yard (better develop a collections management policy and clear it with the board of directors)?

Besides two well-known environments (“well-known” is a relative term), the Sign Field and the

Garden of Eden, Kansas seems to be rock chalk full of obscure environments. In the future, I will write a post or two about art environment mecca Lucas, KS, as well as the Sign Field and the great works of the now defunct Grassroots Art Association. But for now. suffice it to say, like California and Wisconsin, Kansans have a yen to use their lawn as a giant canvas. Today we are dealing with Glenn Stark’s Yard and what becomes of these little-known out of the way places.

Glenn Stark’s house is located in Kingman, KS, a small town of around 3,000 people. In May 2014, my old lady and I were on a Kansas art environment excursion. I had seen photos of Stark’s house on a few websites and it looked interesting, but there was very little information to go on. I had an address plugged into the GPS but it was a bit out of our way and I wasn’t sure I wanted to take the risk. A few times I had planned to visit a site and once I got there the owners were not around, or a fence was up and “NO TRESPASSING” signs were placed around the perimeter. The only official website for Stark’s art was built by his stepson years ago and hadn’t been updated since 2006. There were no mentions on Yelp or TripAdvisor. Makes sense this wasn’t a tourist attraction, just some guy’s house. I had tried calling a phone number I found on a Kansas travel site but it was disconnected. All I knew was that Stark was supposedly very friendly and that he was in his late 90s. Was Glenn still alive, were the statues still there, would he mind visitors? If they were still there would I be allowed on the property? (I do realize that the fact that photos from my visit are littering this post kills any suspense for the reader). 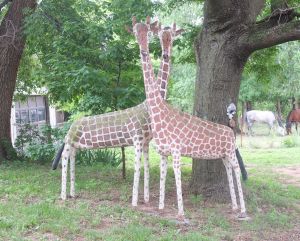 We arrived at his house on a rainy afternoon. The house and concrete statues that Stark built were still there crowding his front yard. We hesitantly knocked and Glenn’s wife Mary Stark came to the door. I asked if we could take photos of the yard. She was so gracious and nice, she revealed that Glenn was actually in the house, but he was in hospice care. This ended up turning into one of those really unique and special experiences.

Mary came out to give us a tour. The love and admiration for her husband were readily apparent. She showed us around the yard telling us the story behind several pieces and even insisted we climb on some of the statues for photo ops. Glenn, a retired Baptist preacher, had been crafting his statues for decades for himself and his friends and neighbors. Several of the pieces he made for others ended up back in his yard. Stark had a keen sense of humor and his concrete statues included various people from real life and folklore, totem poles and native and non-native Kansas critters – including  giraffes, a big foot, Hagar the Horrible, a bear chasing a guy up a tree and a dinosaur in the midst of eating a human. Everything was a cartoon character come full size.

One of the true joys of visiting different sites have been the time I’ve met the artist. Mary was such a great woman, a true inspiration, she had so much spirit and verve and was so delighted to share her husband’s work with total strangers. While I never got to meet Glenn, as he was too sick, meeting Mary was a pure joy. At the time, she did not know what was going to happen to her husband’s works when he passed.

And this is definitely an issue for these less treaded sites. There are only so many art and community organizations able or willing to shell out the money to protect them. Is an art museum going to purchase a house in the middle of nowhere Kansas so the small community and small handful of art environment pilgrims make it out to see them? Sometimes. This is not one of the more prestigious or well-known art environments. To be an obscure version of an obscure artistic medium does not help with conversation issues. Hell, no one ever even took the time to give Stark’s yard a catchy name.

Every month or so after visiting the Stark’s yard I would check online to see if there was any news. Sadly, Glenn did finally pass away in September 2014 at 97 years of age. I still kept checking to see the fate of his statues. I feared for the worse.

So, the best case scenario is that the yard would be protected and conserved in perpetuity (forever and ever), worst case scenario is that the sculptures were mowed down. What we got was good, not perfect, but good. The majority of sculptures were removed by the city of Kingman and relocated to a park in town. Here visitors can still appreciate them and the statues don’t have to leave the community or get lost in a museum’s storage space.

Here is how they look now in their new home in downtown Kingman.

Their new placement seems to be a bit haphazard and lacks the charm of the original, but at least they are still around for the community and travelers to appreciate.

Glenn Stark’s statues have been moved to a park at the corner of Main Street and Sherman Street in Kingman, KS at the tail end of the downtown area. It is free and open 24/7. Kingman is not really near any major cities. The closest is Wichita, KS, which is about 45 minutes away. It is over three hours from either Tulsa, Oklahoma City or Kansas City.

Also, about a mile east of town on US-400, look out your car window for Stark placed a couple of bison statues on the hillside there.

Things to do in the area:

Although, it is not near any major cities there are still some pretty cool travel opportunities.

It is only 45 minutes southwest from Hutchinson, KS, where you will find the Kansas Cosmosphere & Space Center. The Cosmosphere is considered one of the very best space museums in the country and has to win some award, maybe runner up to Crystal Bridges, for most important cultural collection located in the middle of nowhere – suck it D.C. They have a great collection of artifacts detailing the Space Race between us and those dirty Ruskies. They actually have the authentic Apollo 13 command module, the one that Tom Hanks used to fly around in (poorly).

Stark’s statues are a little over one hour drive due east on US 400 from a truly terrific grassroots art environment, M.T. Liggett’s Sign Field. Liggett’s welded signs line the fence outside his home/ studio. They are great, funny and often hostile. Whereas Stark’s concrete statues are silly, light and cartoonish, Liggett’s signs skewer everyone from politicians – federal, state and local – as well as neighbors, friends and people who have done him wrong. One of the reasons I love art environments so much is the because of their variety and you don’t get a much better dichotomy then these two sites.

I want to thank Keith Stokes for giving me permission me to use his photo of the relocated statues. His site, Kansas Travel, was a great resource that I used for planning my 2014 Kansas road-trip.

2 thoughts on “The Life, Death and Rebirth of a Kansas Grassroots Art Environment: Glenn Stark’s Yard”