New York is a really big state. A few weeks ago I blogged about several sites along the Hudson River in the southeast corner of the state, so for no really good reason this week I have decided to yap about a really colorful site, with a really interesting mythology, in the northwest corner of the state – Prophet Isaiah Roberston’s house. 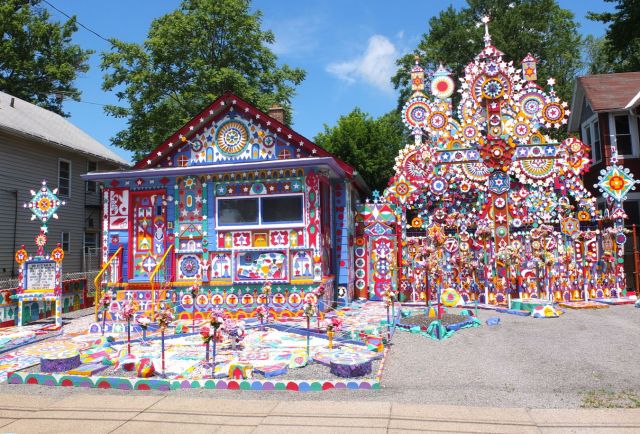 Prophet Isaiah Robertson was born in Jamaica and after living in Canada moved to Niagara Falls, NY in 2004. A few years later he started building a true “visionary” art environment surrounding the exterior of his humble abode. In interviews Robertson, a self-trained artist, has said that this environment is the work of god and not of man, and that prophecy guided his hand. As you can see from the photos, the site is very colorfully painted and includes some really terrific and intricate woodwork. 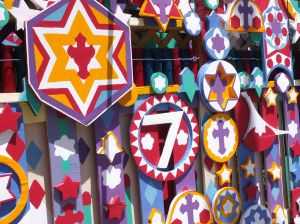 What at first, looks simply like a rainbow of painted crosses, opens up into a myriad world of symbolism. Wifey and I were taking photos and talking to the Prophet’s neighbors, who happened to love the site, when Robertson drove up in his big black pickup truck. He was extremely friendly and gave us a little background on the site and also went into depth explaining the symbols that he crafted into his house’s vivid facade. There are, as to be expected a lot of crosses, but also identifiable iconography from other religions besides Christianity, including Stars of David and Islamic symbols.

In a video interview, Robertson points to his house and says, “So everything here my brother is a reading of the old testament prophecy and the new testament prophesy.” And it is all in there, from the seven seals, to the Ark of the Covenant to the crucifixion. For a self-trained artist, who is motivated by vision to create, he has crafted a site rich in conceptual metaphors.

Educator, photographer and fellow folk art environment enthusiast Fred Scruton has done an amazing job of documenting the Prophet’s site over the years and all the symbols. Please check out his website, for a really detailed and thorough overview of the place. 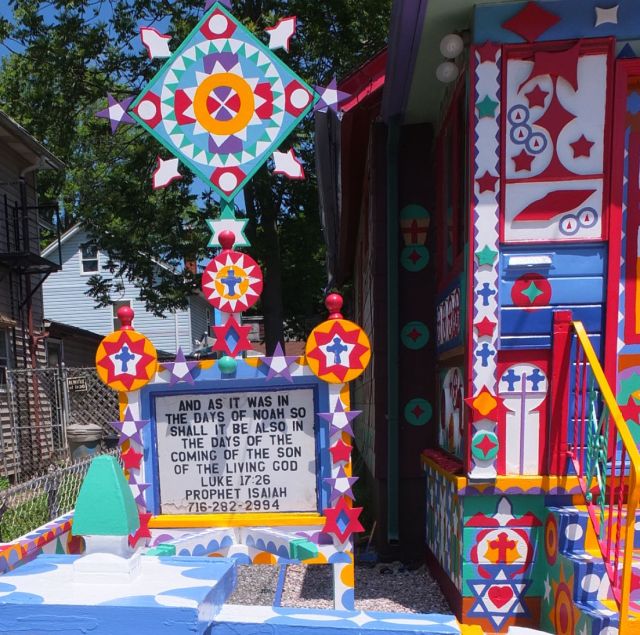 Robertson is the first “prophet” I have ever met and this title stems from a fascinating and dense mythology (prophecy) that he has weaved through his environment. He foretells that during the end times, all souls will pass his house on their way to the Falls, which will be turned into a pit of fire. Here , your soul will be judged. On Goat Island, a small island on the American side of the Falls and part of the State Park, god will separate the sheep (baaaa) – the followers, from the goats – the rest of us. The goats will be tossed into the burning pit (booooo). Although he figuratively spouts fire and brimstone while touring the house, he does it in a friendly, matter of fact way. I would probably fall into the goat category, yet at no time did I feel unwelcome, or uncomfortable. Just the opposite, Robertson was kind, welcoming and very pleased at being able to share his artistic creation, his prophesy and his ideology.

Of note, Robertson prophesized that the end of the world was going to take place in 2014… Woopsie. But just in case he is on to something, I recommend visiting his house while Niagara Falls is still a beautiful series of waterfalls and not waiting till Armageddon, when your soul will fly by the site on its way to judgement. At that point, you will probably be too preoccupied to take nice photos. This is a good one folks, it has really beautiful craftsmanship and a great story, so don’t skip it.

The Prophet’s house is located at 1308 Ontario Ave., Niagara Falls, NY. The environment is completely viewable from the sidewalk. Prophet Isaiah does enjoy sharing his stories and his art with people so feel free to knock and see if he is around. As always, this is private property so be respectful.

Niagara Falls is about thirty minutes from Buffalo and an hour and a half drive from Toronto, Canada. It is about four hours from Detroit, MI (you have to drive through Canada) and is actually farther, over six hours, from New York City.

There is a giant waterfall about three miles down the road.

While in no way is the waterfall a lost wonder, or the type of place I babble on about on this site, it is rather magnificent. There is city of Niagara Falls in Canada and another in USA, divided by their namesake Falls. It is funny, because Americans are typically known for being gaudy, obnoxious and loud and the Canadians are shy, pleasant, every day people who live in harmony with moose and bear. But at Niagara Falls the script is flipped and the Canadian side is a big flashy tourist trap and the American side is a well groomed, understated state park. That’s right Canada, SHOVE IT UP YOUR DUMB MAPLE LOVING BUTTS. America has out-pleasanted you!

On the American side –

I recommend checking out the state park. Both the Maid of the Mist boat tour, where you wear a cheap raincoat and go almost under the large Horseshoe Falls and the Cave of the Winds, where you walk along a set of wood stairs almost directly under the American Falls, are fantastic. The namesake cave is long gone, but Wooden Stairs of the Wind does not sound as cool. Both have been tourist attractions for over a century and both give you free rain ponchos (a rare treat for poncho collectors).

On the Canadian Side-

They also have the same boat trip under the falls, but it is operated by a different company. While they do not have Cave of the Winds, they have a similar attraction named Journey Behind the Falls.

The attractions at the Falls (either side) are about as touristy as you can get without there being a giant Mouse strolling about, but don’t let that deter you, this is a pretty amazing area. You’re not too cool to enjoy a giant perma-rainbowed roaring waterfall, are you?

On the Canadian side there is an area called Clifton Hill – several square blocks of wax museums, fun houses and Tim Horton’s doughnut shops. This is the area that really gives the Canada side the bad rep as being Americanish. But wax museums are cool by me, so check the area out. A little museum history: before museums got into actually trying to be educational collecting institutions many were what were called “dime museums.” These dime museums were composed of freak-shows, cabinets of curiosities, wax museums and also they put on simplistic morality plays (about subjects like the dangers of alcohol and women getting the vote). I see wax museums as a link to the old, weird America (even when in Canada). Sadly, many of Clifton Hill’s wax museums have gone out of business in the last decade. Support your local wax museum.

People for years have been making containers, getting in them and going over the side of the falls. Some die, others get a modicum of fame that is worthless in this internet era. You can see a handful of these crafts at the Niagara Daredevil Exhibit. Although small, I highly recommended this place for fans of spectacle.

Niagara Falls is only twenty to thirty minutes away from Buffalo, NY, which is a pretty rust belt city with some cool things to do. Having grown up in the Detroit area, I can really appreciate a city like Buffalo. This is a city that was once a major industrial boomtown that went to seed and is now slowly going through a rebuilding phase.

As far as attractions go, they have a history museum, car museum, an art museum and a nice Frank Lloyd Wright house, but there are two stops I highly recommend.

First off, City Hall in downtown Buffalo is a beautiful art deco building (I am a sucker for art deco, so you may have to endure me yapping about it from time to time). Guided one-hour tours are available every weekday at noon.

Also, I am a sucker for World’s Fair and Buffalo had a big exposition (fancy way of 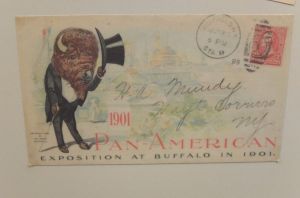 saying World’s Fair) in 1901. In fact President McKinley was assassinated at the fair by an anarchist (which I was surprised to learn was not a punk rock kid from the mid 1980’s who wore combat boots, listened to the Exploited and drew scratchy letter A’s in their trapper-keepers). The Buffalo History Museum has a nice exhibit about the expo, they even display the gun that was used to shoot the president. But, and here’s the catch, the exhibit is not located in the normal museum, it is located a mile away in their Resource Center. You have to make an appointment to view the exhibit, but people work there during normal business hours, so just give them a call a few days, to a week ahead.

Buffalo is a killer regional food/ road food stop. Their main claim to fame is their Buffalo wings, which were invented at the Anchor Bar. While it may be a tourist trap the wings at the Anchor Bar were great and there is a ton of history. There are bunch of other places known for their Buffalo Wings in town, one of the more popular is Duffs. True Buffaloeans (is that right?) also love their grilled hot dogs at Ted’s, and an item I am partial too, a sandwich called beef on weck. Beef is roast beef, weck is a salty roll, and together they make for a delicious sandwich (just add a little horseradish). The two most popular places are Schwabl’s (awesome old-school ambiance) and Charlie the Butcher’s.

Go get saved in Niagara.

One thought on “Prepping for the Rapture: Prophet Isaiah Robertson’s house”