What are Art Environments? 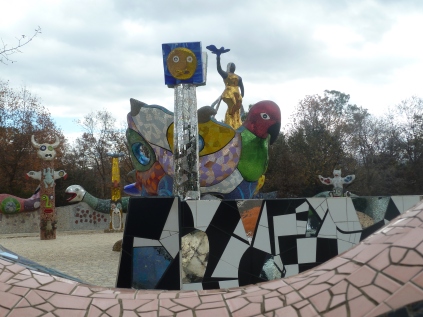 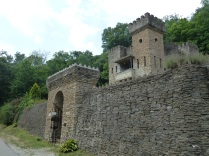 Let’s get the name out of the way first. I personally hate the name art environment; it is too generic and does not get across the uniqueness of these places. On the other hand, most the other prefaces like self-taught, outsider and folk, really don’t apply a lot of the time. Not to get too academic, but folk art doesn’t work because folk implies a tradition tied into a culture, whereas most art environments have no artistic precedent. Outsider art, as a term, originally referred to the art of the insane, or some crazy hermit who is trying to escape from society. Many artists and critics find the term demeaning as these builders are often functioning members of their community, are not insane or giant babies and are not truly outsiders. One term I like is Grassroots Art Environment, but other than a few organizations in Kansas who use it it never caught on. For the foreseeable future this blog will begrudgingly use the mundane catchall, “art environment” (boooo) until someone comes up with a better name.

However, let’s not kid ourselves, and absolutely no disrespect to any of the artists, but part of the appeal of these places is that they are unusual and offbeat. I use those words as terms of endearment. I interviewed Jim Bowsher, the creator of a great art environment in Ohio named the Temple of Tolerance, and he told me that him and other art environment architects are a little off, or what he dubbed, “crazy, but  good crazy.” It takes a certain type of person with a strong independent streak to take the time, money and dedication to go through with the building process.

What makes it tough to categorize art environments is the fact that for every key characteristic, there is a site or two that does not fully conform – there are no hard and fast rules. Be prepared for an overuse of modifiers like “often” and “most likely”.

Here is a list of some of the key characteristics:

They were built often by one person, on their own property.

Art environments are usually not commissioned works, they are built by the land owner for their own amusement.

The artist often uses recycled material found on, or near the site.

Simon Rodia built the Watts Tower with concrete, metal rods and soda bottles, Leonard Knight built Salvation Mountain with paint and adobe made from hay. The type of material does not define them. The environments that tend to last for multiple decades though are made with strong materials like concrete, rock and steel. 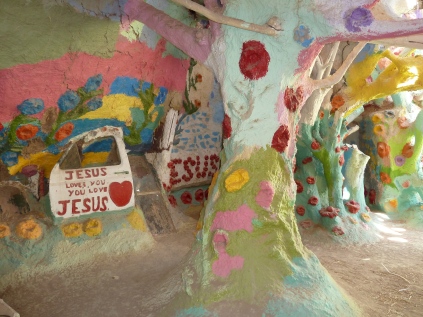 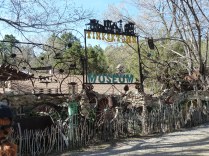 There is often no precedent.

Other art environments did not inspire the artist to create. There is no school of building giant things in your backyard. Jo Farb Hernandez, the current director of SPACES Archive (a great and important art environment advocacy organization that I may talk about in the future) in her terrific and gigantic book on Spanish art environments, Singular Spaces, says, “…there are no schools, no established lineages, no traditions, no manifestos. They are distinctive in form, in medium, in plan, in focus, in aim”. Each one is personal and unique. There are a few examples, like a few of the grottoes in Wisconsin, where the creator first visited another site and said “I should do that in my yard too”, but for the most part, nope.

Sometimes the work is highly polished and other times it is crude.

The skill and quality of craftsmanship varies greatly. One of the terms often used is “self-taught” or “naive”. Many, but certainly not all, of the creators of these fantasy worlds do not think of themselves as artists, just normal people who had an itch to build. There are artists with no formal training who have created exquisite complicated statues. Their enthusiasm, unique perspective and obsessive diligence trumps time in a classroom. 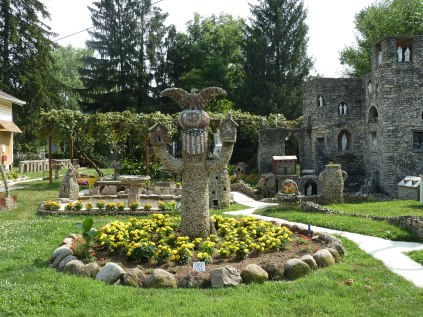 They are not your typical sculpture gardens.

Nor are art environments to be confused with their fancier cousin, the works from the Land Art movement, like Robert Smithson’s Spiral Jetty or Andy Goldsworthy’s many cool stick and rock sculptures.

They are typically big, whether it is one large piece or many smaller pieces.

Many people have built small rock mosaic walls and bird feeders in their backyards, but unless they get to be certain size or scope they are not considered art environments. There is no committee that determines what is and what is not artsy or large enough to be an art environment.

There is no through line reason why the artists have built their environments.

Some have built it out of the need to have a project to pass their retirement time, like the Wegner Grotto in Wisconsin and the Hartman Rock garden in Ohio. Others were crafted after a traumatic event, like Ed Leedskalnin who, and this may be apocryphal, built his Coral Castle to commemorate being left at the altar by his 16-year-old bride to be. However, some environments have been built large, and full of spectacle with the intention of creating a tourist attraction, like the Forestiere Underground Garden in California. A few, those dubbed “visionary art environments”, were built out of an intense religious or spiritual conviction. Some exist just because the artist had a whim to create. When Sabato “Sam” Rodia, the creator of the Watts Tower in Los Angeles was asked why he built his gigantic spires, he famously said, “I wanted to do something big and I did it”.

There is obsession and mania running amok.

Most environments took years, if not decades to build.

Not only are they created with a idiosyncratic personal vision, there is often a strong sense of personal independence.

Typically the artist did not seek out the proper paperwork or legal permission. There is often a strong rebellious, I can do whatever the fuck I want on my own property, so suck it, vibe. As you can imagine, this attitude is what gets them built, but also makes it tough to maintain once “the man” comes after you with his bulldozer. The late Chief Rolling Thunder, the creator of Thunder Mountain Monument in Imlay, NV, is quoted as saying, “The first person that went to apply for a permit to put up something on their own land should have been shot for treason.”

A lot of environments are located in the hinterlands.

Because property is of a higher value in the big cities the environments that often last the longest are located in the land behind, AKA the boonies, the sticks, the outskirts, the bush, the country, or in more economically depressed neighborhoods, like the Watts Tower in Los Angeles, CA and The Heidelberg Project in Detroit, MI.

They often do not last without a fight.

Built for hundreds of dollars and preserved for thousands (or more). Due to the lack of proper building permits, the city/ county may tear them down. Being built on solely owned residential property, they are often destroyed once the creator or family moves on. Because the artists may have little training in the best ways to use their materials and maintenance costs a fortune, a lot of environments are left at the mercy of the elements, teenage vandals, or neglect.

In the last five years or so, since I have been a fan, at least two well known environments have either been demolished (RichArt’s Art Yard) or left to the mercy of vandals and the elements (Margaret’s Grocery, one of the more well known sites). There are probably many more smaller environments that have come across a similar fate in the last few years. The Grassroots Art Center in Lucas, KS on their website estimates that 90% of all environments are destroyed after their owner passes away.

That’s why it is so important for people to visit them.

Often the thing that saves a place is community support. By tracking down and visiting environments you show the neighbors, who may think the place is an eyesore, that this place has aesthetic value (to someone) and is a potential point of pride. By spending money in hotels, gas stations and restaurants located in small rural communities, you show the local government that this strange place has economic value. You need people to rally around their local art environment. People to sign petitions, to stand in front of the bulldozers, to help weed and touch up the paint every few years and you need people with fat wallets to donate cash.

2 thoughts on “What are Art Environments?”